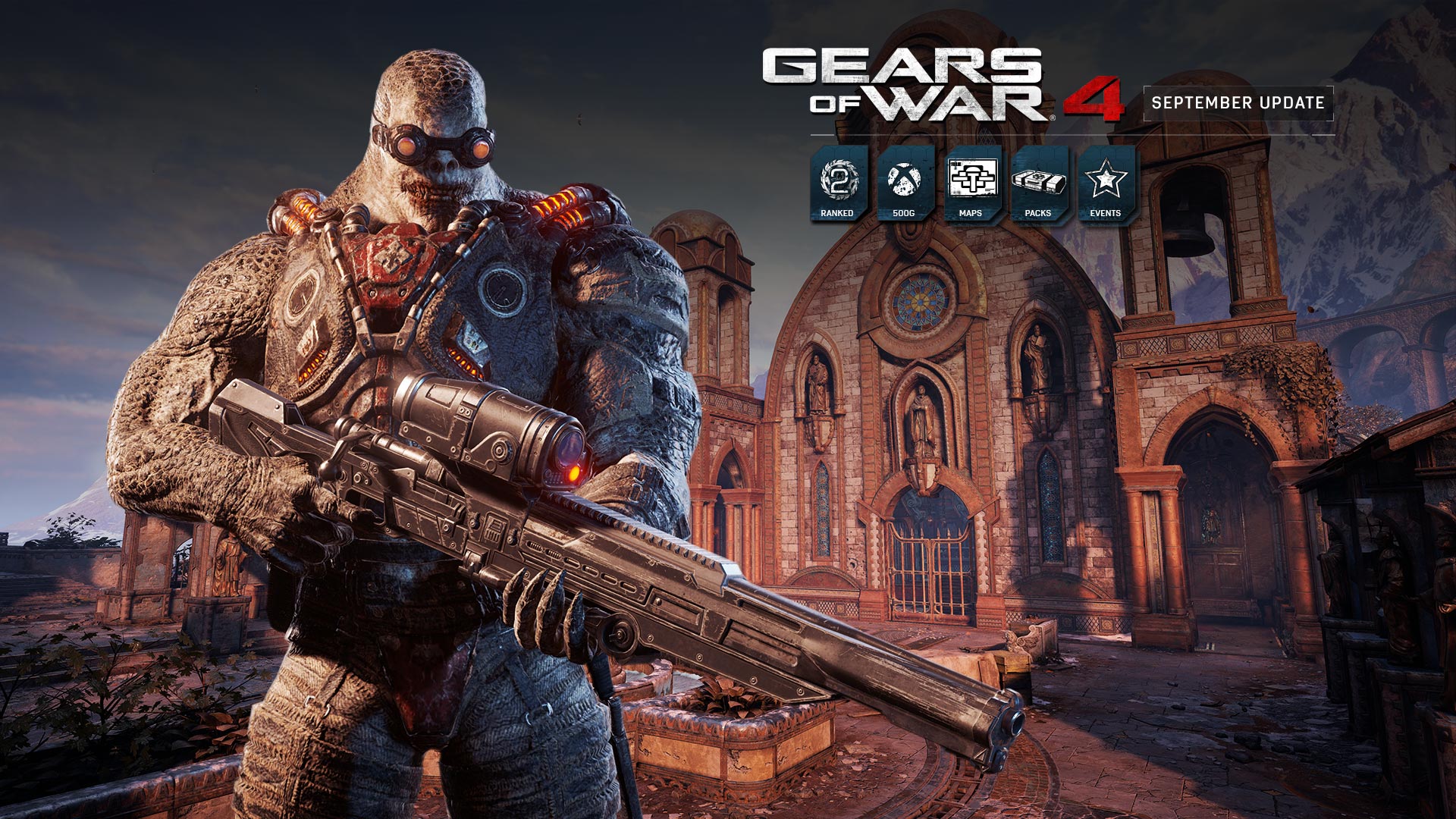 The end of summer is fast approaching, but there’s plenty more heat to come from Gears of War 4 this September! This month, we’ve got news on the latest maps for the game, major matchmaking improvements and a look ahead to the future of the game. Let’s get to it.

Check out the trailer above for the first footage of Mercy and Harbor Haze in action, then read on all the info!

This month marks the release of Harbor Haze with dynamic mist that changes the battlefield, and the return of the classic Gears of War 3 battleground - Mercy!

The classic Gears of War 3 battleground set in the home town of Dominic Santiago’s wife, Maria, makes its much anticipated return in Gears of War 4!

Now set in the end stages of Winter, the fights you know and love are all here,– the close-quarters pew battles of the church and the fight to dominate the high ground in the center of the map play just like you remember.

Prepare for nerve-shaking combat in Harbor Haze! This new take on Harbor is set during the day, and introduces a brand new mist mechanic that envelopes the battlefield.

The mist can roll in from the sea at any time, dramatically reducing visibility and providing the perfect opportunity for surprise attacks or sneaky flanks. The mist changes the dynamics combat drastically – if you’re brave enough to find out how.

Both of these maps are available now in the Developer Playlist with Double XP and 20% Bonus Credits for Season Pass holders. Look for them in Public Matchmaking for all players beginning on September 12th!

If you're new to Gears 4, these achievements are the perfect on-ramp for your first 10 hours in the game. Yet to jump in? Stay tuned for news on our Game Trial returning later this September!

This month also brings major improvements to your matchmaking experience in Gears of War 4! In the coming weeks, we’ll be switching from Region Locked matchmaking (matching you only with players in your choice of Region) to a new Quality of Service matchmaking system.

What does this mean for you? We’ll match you on local data centers with players of similar connection quality more often, resulting in fairer and better quality matches every time you play.

On top of this new system, we’ve also improved the Skill Based Matchmaking to give you better quality skill matchups on top of better network quality, arriving mid-September with…. (wait for it)

MORE TO COME THIS SEPTEMBER

… Ranked Season 2! In Mid-September, we’ll be ending the first Ranked Season and handing out those glorious Reward Weapon Skins for eligible players. Ranked Season 2 resets the playing field, and you’ll need to go back out there and earn your Ranks again in each playlist.

We’ll also have two new Gear Packs this month beginning with the return of the Locust Sniper. On top of that, we’ll have a special event for Versus and a Bonus Loot Drop event in our 25 wave Horde experience – Horde Frenzy!

The Future of Gears of War 4

Next month marks the first anniversary of Gears of War 4 (can you believe it?!) and the arrival of the final two maps in our 24 map plan for the first year of Gears of War 4. We’ve come a long way since October 2016 – here’s just a few stats on our journey so far:

Stats aren’t the only story of this journey though. You - our amazing fans – have played more than 10 BILLION minutes of Gears of War 4. You’ve helped us refine the game with valuable tuning feedback, entertained us with your streams and videos, and humbled us with your stories of friendship, competition and even love over the past 11 months. All of this drives us every day at the studio and we want to thank you for the incredible support so far.

So does this journey end with our final map drop in October?

Not at all. October may signal the end of our monthly maps and feature updates for Gears of War 4, we’re far from done.

We’ll have a lot of news to share about our huge multi-month anniversary events, like ‘Thanksgibbing’ and ‘Gearsmas’ and more in the coming months. We’re also working on additional benefits for our Season Pass holders as we move into Year Two – look out for news coming in October.

Thank you for all your continued support, feedback and passion. Here’s to another year of Gears of War 4!

Our latest Horde Balance pass is focused on the dynamics of MG Sentries and Shock Sentries, and how they fit into your defensive lineup.

First up, MG Sentries. When we took a look at the new meta evolving with the latest Turret tuning, we found that Horde players were relying heavily on MG Sentries to pass the last twenty waves. With Level 4 MG Sentries, which were significantly more powerful than the Level 3 MG Sentries, players were having to contribute a lot less than expected in the later waves thanks to the MG Sentries doing the heavy lifting. Additionally, the early MG Sentries were not doing enough to help either.

Our new tuning upgrades Level 1-3 MG Sentries to be more effective, which should help players use them more effectively to survive their earlier waves of Horde. The MG Level 1-3 sentries fire faster, do more damage, and – at Level 1 and 2 – cost less to maintain. Level 4 MG Sentries will now cost more to keep loaded with ammo and do less damage than before to make them an investment choice rather than a must have.

Our last update to MG Sentries leads us into our Shock Sentry changes – MG Sentries no longer have any stopping power whatsoever, and will now only suppress (cringe) opponents under fire. In order to slow enemies down, you’ll now need to use the vastly more effective Shock Sentries. We’ve drastically reduced the delay between shots, reducing with each level to a minimum delay of 1 second per shot at Level 4, and increased their damage to ensure that successful Sentry defenses need a mix of Shock and MG Sentries to be truly effective.