One of our favorite things in Gears is that we love to get in the spirit of cultural moments from around the world. This time of year means it’s time to get all spooky for our next Halloween event from October 23rd to November 5th!

Juvie O’Lantern Heads are back with the return of Pumpkin Ball!

If you haven’t played Pumpkin Ball before, this remix of Dodgeball reduces respawn timers to 1 second for a more frenzied scary Dodgeball experience. Expect some shocks as respawning enemies appear out of thin air.

This year, we’ve upped the ante on the mode’s mantra of being ‘where the dead don’t stay dead for long’. Pumpkin Ball now has three new elements on top of the respawn timer change – next-to-instant self reviving, more downs allowed per life and reduced ammo in your starting weapons.

Like a true Zombie horror experience, headshots and gibs are your best chance to survive the onslaught of your enemies. Can you hold your nerve?

The Monsters will invade this Halloween! Monster Mash is a rich roster of Swarm only enemies, packed into 25 wave variants on both Normal and Insane Difficulty. Horde with the insanity of Horde Frenzy (Normal and Insane difficulties).

If you haven’t played Monster Mash before, it also includes rare Horde enemies (like the Swarm Sniper) and random wave combinations. And of course, just like Pumpkin Ball, it wouldn’t be Halloween themed if it didn’t feature darker maps now would it?

We’ll also be including every Midnight Omen weapon skin in the pool throughout Halloween. While this won’t be the best way to hunt down a specific weapon skin, you never know if that trick might turn into a treat!

Monster Mash and Pumpkin Ball will both offer up 3x XP until October 26th. Why October 26th? Because, beginning next Friday, we’re turning on our biggest XP bonus ever for one whole week globally across Gears 4. We’ll drop the number next week in What’s Up.

The ultimate collection of previously released Zombie and Day of the Dead characters is in the new Lost Souls Gear Pack arriving Friday October 26th!

From the 10 gory Zombie Characters – including the Zombie Carmine trio – and the 8 elaborately adorned Day of the Dead characters, you’ve got plenty to choose from. The 2017 Day of the Dead and Zombie Weapon Skin sets are also included to make sure your weapons don’t miss out on the fun either.

Here’s the full list of what’s on offer in the new pack when it arrives next Friday:

Day of the Dead

Last week, we launched the first iteration of Stay Frosty with an intention to develop the mode with the help of community feedback.

Version 1 was all about trying something new before we moved to something more traditional. With Version 1, we wanted to introduce a high risk high reward Golden Gun to see how the meta would play out ‘in the wild’.

In the wild, it played.. well, like Golden Gun. We anticipated that could potentially happen and, going forward, including Golden Gun is unlikely based on our first test.

Version 2 is out now with a much more traditional take – a very strong Hammerburst, a headshot centric pistol (a Boltok this time) and 1 frag starts with a reduced damage radius. Let us know what you think in our official feedback thread or by tweeting @CoalitionGears. Don't forget that Stay Frosty will be disappearing for a little while after this weekend along with the associated Heartbeat challenges.

The classic variants of Marcus, Dom, Cole and Baird are the stars of our October Series 3 drop!

Once they enter Series 3 this Friday, all four characters will become craftable with scrap and discoverable in any Gear Pack. If you haven’t already added them to your collection, go get em!

In case you missed it last week, here’s a quick reminder on the major milestones in the Road Ahead for Gears of War 4 until the end of the year. (Side note: We've been testing Boss Rush lately and we're really excited about this one!).

Just like our Pumpkin Ball event, we'll also be looking to see if there's any way to add a new element to Thanksgibbing this year. Stay tuned for news as we get closer to the end of November! 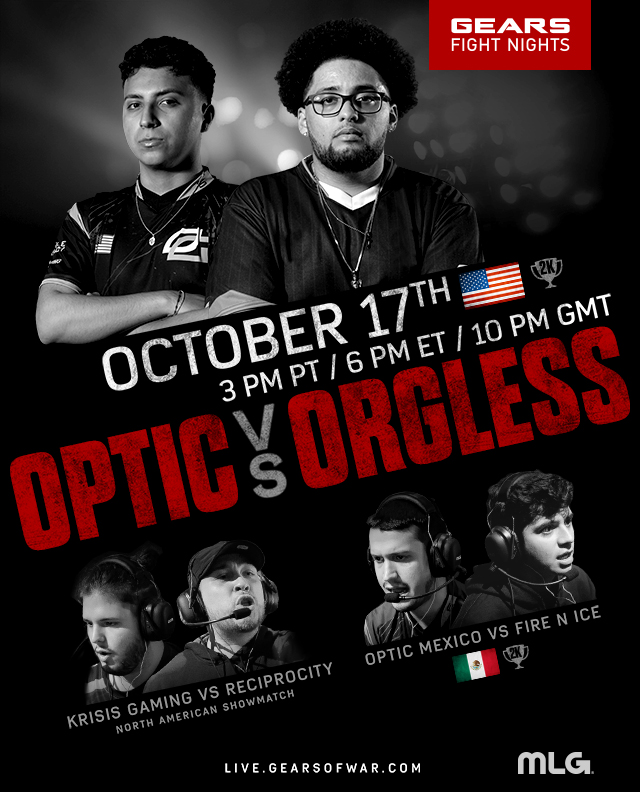 Gears Fight Night this week featured the a showcase match between North American teams Reciprocity and Krisis; the 2K final for Latin America, with OpTic Mexico vs Fire n Ice, and; the North American 2K final between OpTic Gaming and ‘Orgless’, plus a significant announcement and the release of Esports Supporter Pack 11.

This week’s broadcast kicked off with a showcase match between a well-established Reciprocity team and a Krisis squad, whose roster, despite being recently constructed, is far from green and not short on talent. Unfortunately, however, the squad’s lack of time together as a cohesive unit would show, with Reciprocity taking the spirited match 7-3 in their best of one series.

The final two matches featured a double dose of the Green Wall competing for the 2K title in their respective regions. First, in the LATAM 2K Final, OpTic Mexico proved just how dominant they are in their region by obliterating the second seeded Fire n Ice 7-3, 7-1 to win yet another 2K title. The second match, between OpTic and their season-long rivals under the name ‘Orgless’, proved to be much closer. After going back-and-forth throughout the first frame, OpTic Gaming would edge out Orgless on the final two rounds to take map one 7-6. Map two started out more of the same, with the top tiered juggernauts going into halftime with an even 3-3 split. From there on out, however, it was almost all OpTic, who would go on to take 3 of the final 4 rounds, secure a 7-4 map two win, and with it, another 2K title.

We rounded out this week’s broadcast by announcing a significant change to the Gears Pro Circuit. For those who missed it, we recently ran a playtest series where participants would trial a series of new maps in the roation and provide their feedback via a survey. This week we announced those results, and the subsequent changes to the Gears Pro Circuit. Effective immediately, three new maps have been added to the Gears Pro Circuit map rotation: Slab, Old Town, and Diner, and; one has been removed: Reclaimed. More info on this update, along with the new Pick/Ban format can be found here: https://gearsofwar.com/en-us/esports/GPC-S2-OctoberUpdate.

Greetings Gears, Vectes here, back with another edition of Museum of Community Glory.

This week, we wanted to highlight an awesome group of Gears fans that commits itself to ensuring everyone within the forums has a place to talk Gears of War and make new relationships with like-minded players.

Please meet the GFC. Their team of five members comes up with creative events that all users within the Gears of War forums can attend. Beginner to Advanced, all players are welcome.

The GFC is hosting their next event on this Saturday (October 20) and going back to basics: “Classic” will be an event where teams of 4 players will be pitted up against one another in Execution styled matches. These matches will be set up just as if we were playing the original Gears of War!

You have until Friday to register your team for Classic. Click here to access all details about the event.

To learn more about the GFC, be sure to visit their dedicated thread on the forums. You can also keep in touch with the group on Twitter and follow the team’s individual Twitter accounts below:

Join us later today at 3PM PT/ 6PM ET for our Gears Weekly Live Stream from right here at The Coalition! We'll be holding a Gears 4 Anniversary 'Pub Quiz' to play along with from home, giving away the Corp EMBAR and a second chance at the Dropshot, as well as answering your questions as always.

Interested? Bookmark this link and hop in at the time shown above: https://live.gearsofwar.com. See you there!