The biggest event in Gears of War’s competitive history is less than 2 weeks away! The now $300,000 Gears Pro Circuit MLG Columbus Open Powered by Duracell is open to everyone, and still has passes available, but 12 of the 16 Pool Play spots have been locked up. Below you will find a preview of the teams that have qualified for Pool Play already, and await the top 4 teams from the open bracket.

There isn’t much to say here – the top seed heading into the MLG Columbus Open has been nearly unstoppable throughout 2016, going back to their ESL Pro League Season 1 victory on Gears: UE. After winning the Gears 4 Launch Invitational in dominant fashion, along with nearly every online tournament since, the Green Wall simply looks nearly impenetrable and is unquestionably the team to beat going into the $300,000 event.

Although Epsilon may owe some of their early success to Europe’s most winningest Gears player, Jack ‘Reaxion’ Oliver, Epsilon’s continued success since his exit proves that the team was not overly reliant on their all-star slayer. In fact, seeing as the team has won every 2000 Series tournament to date, they could potentially even be better off. Although Reaxion’s raw skill is unparalleled in the European community, he is known for having a volatile attitude that can slowly eat away at his team. On the other side, his replacement Ash is a former teammate of Phelpzy, Krazed, and Hydrone, and the squad was nearly unstoppable while they were together on Gears UE as Champions OD. Whether or not this will be enough to get them out of a nasty Group A relatively unscathed remains to be seen, however the squad should be confident and composed going into the event, with every member boasting a good amount of LAN experience.

Ever since the onset of Gears UE, Enigma6 was a team that many expected to do well. Unfortunately, however, this hasn’t been the case. After failing to make it to the top 4 throughout Gears UE, Eternity and company parted ways with longtime teammate Brendon ‘Po5eidoN’ O’Neill to make room for former Team Kaliber teammates Christopher ‘Crushmo’ Lauzon and Ozby ‘Noxious’ Romero. Although the change didn’t seem to have its intended effect in their first outing, with E6 being swiftly eliminated from the Gears 4 Invitational following losses to EnVyUs and Splyce; it may be starting to take hold, as E6 has advanced to the finals in the latest 2000 Series tournament, with wins over NRG, Orbit and Lethal Gaming. Could this be the event E6 lives up to their lofty expectations?

The second overall seed, Revenge Gaming, shed the ‘Online Warrior’ label in style at the MLG Launch Invitational, knocking out MindFreak, eUnited, and NRG to take third, and even giving OpTic a run for their money in Gears 4’s opening eSports event. Since then they have only built on that momentum, winning 3 daily online tournaments, holding the top spot on the North American ladder with a 52-1 record, and knocking off nearly every top-team at least once in online play. Having proven they’re a force to be reckoned with offline as well as on, and possessing a paradoxically intelligent-reckless playstyle that gives many teams fits, Revenge undoubtedly have the potential to once more make it into championship Sunday, and perhaps even win the entire event.

Supremacy is the second seeded team coming out of Europe, and features a squad chalk-loaded with veteran European Gears talent that effectively grinded their way to Columbus. Unlike Epsilon, who only really competed in the 2000 Series Tournaments, the French-owned all-English squad have seemingly not missed a daily or weekly tournament since the Pro Circuit kicked off in early October. Unfortunately, they have only managed to win one of these tournaments, and are considered one of the biggest underdogs going into the event – especially considering they share a pool with Revenge and Glory.

Less than a month ago, Xcells was with NRG, Soto was with Team EnVyUs, and both Fragou7 and Speedy were with VexX. Now, along with Krash, they make up the roster of BOT Empire. Although they haven’t been together for very long, the squad formerly known as Glory is already looking very strong, having dismantled the always formidable eUnited in their first 2000 Series tournament as a full team. Like most new squads, they may still have a way to go in respect to their overall team-play and chemistry, but they certainly have all of the pieces they need to be dangerous come Columbus, and undoubtedly the motivation to get there.

The Boys in Blue enter the MLG Columbus Open as the only team outside of OpTic to win a 2000 Series tournament – beating eUnited on the premier broadcast of Gears Fight Nights to win the first Gears 4 weekly online tournament. Following this victory, which came without Praized in the line-up; the organization made the decision to drop Soto and officially pick up SoLuRs, who had originally been brought on as a sub for the then-banned Praized. Since then, Team EnVyUs has managed to topple the Green Wall in a few daily online tournaments, and certainly have the raw slaying power, skill, and experience to take out their chief rivals on the biggest stage in Gears of War history.

Mindfreak are the undisputed champions of the Asia Pacific region, having not dropped a single map as a full squad since forming in the later stages of Gears UE. After a disappointing debut on the world stage at the Gears 4 Launch Invitational, the team has done their best to revamp their training, trading lag-free gameplay for practice against some of North America’s top teams, but still have the misfortune of not being able to really train against other top-flight teams below 300 ping. That said, although they’re considered one, if not the biggest underdog going into the event, Australia’s finest certainly are not a team to be taken lightly, and could be a dark horse to keep an eye on come November 26th.

Last summer VexX Gaming brought a bunch of “GB kids” to the Gears UE MLG North American Open, where they quickly shed the “online warrior” label by taking out teams like E6 and PR and The Funky Bunch to eventually finish in the top 6, and; until a week or so ago, it looked as though VexX Gaming was going to do it again. Seemingly coming out of nowhere VexX’s latest acquisition was a squad of young players that seemed to be consistently making it to the later rounds of online tournaments, only losing to some of the top-tiered teams in the game. Although this former squad has gone through some significant changes as of late – with Glory’s Ben ‘Strangulate’ Laird and Bobby ‘Phenomxnon’ Kenny swapping places with former VexX members Fragou7 and Speedy – we shouldn’t expect much to change between the VexX we saw lighting up the online tourneys and the one that makes the trip to Columbus next week. In fact, the veteran leadership of Strangulate, who captained Gears 3 dynasty team Synergy and shepherded Revenge’s core 3 through their first LAN, and the experience of Phenomxnon; might be exactly what the young team needs to make a deep run at the biggest event in Gears history – and, like Glory, you best believe this team is out for blood.

After a disappointing outing at the Gears 4 Launch Invitational, eUnited shook things up a bit by dropping Benjamin ‘Strangulate’ Laird from their roster and replacing him with Rodney ‘Clouts’ Vaughn. Although the team seems no worse for wear since making this change, they haven’t fared too much better in online competition either. That said, they appear to be potentially turning a corner at the opportune time, taking out both EnVyUs and Glory on route to winning their first 250 Daily Tournament last week. Although time will tell if they’ll be able to continue building on this momentum into the $300,000 event, it’s safe to say that eUnited is hungrier than ever, and undoubtedly a team to watch out for next week.

The toast of Mexico, Splyce showed the world that they are a force to be reckoned with regardless of their opponent at the Gears 4 Launch Invitational in October. Boasting a roster that has not lost a LAN event in Mexico since coming together in 2012, Splyce utilizes a high-octane, exceedingly confident, borderline reckless playstyle that few teams have the raw skill to pull off. They’re going to need every ounce of this skill come November 26th, however, as one of their early opponents will be the team that ousted them from the winner’s bracket at the Launch Invitational – eUnited.

Securing their position as the final team to qualify for Pool Play in the final tournament before the roster’s locked, the squad formerly known as Team Legendary features a fairly lethal combination of up-and-coming players and proven veteran talents. Although a decent portion of the team has yet to experience the game in a live environment, they have demonstrated that they can compete with the best, having taken down teams like VexX Gaming and eUnited, and even pushing Team EnVyUs to the limit in a 7-5 loss that saw RushieZ drop 41 kills. How the squad will perform once they arrive in Columbus is anyone’s guess, but if this squad gets hot then they could be a problem for any team.

As an Open event, the tournament’s final stage is still far from being set. In fact, 8 teams will make it out of the Open tournament, with the top 4 teams from the Open Winners Bracket being slotted into the final 4 Pool Play slots, and the final 4 teams from the Open Losers Bracket getting slotted into round 1 of Championship Losers Bracket. While teams like NRG, Orbit, and France’s Vitality are expected to make it out of the Open tournament, with a $300,000 prize pool on the line, the MLG Columbus Open Powered by Duracell is really anyone’s game.

MLG and Gears of War are back together again for the first Gears Pro Circuit in years. The Gears Pro Circuit Columbus Open powered by Duracell takes place November 25-27 in Columbus, Ohio. Be sure to tune in at http://live.gearsofwar.com starting on Friday, November 25 at 5:00 ET (2 PT, 10 GMT) to watch the event. Watching at http://live.gearsofwar.com gives you a chance to claim the exclusive "Bodied" emblem, plus your chance to win prizes such as a Gears of War Xbox One S, Xbox Elite Controller, Gears of War 4 packs, rare character and weapon skins and more! 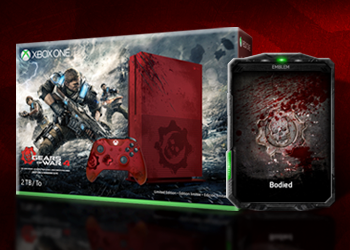 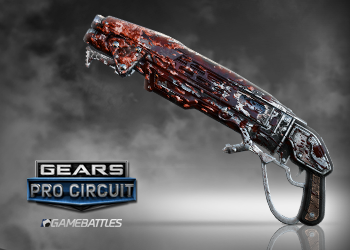 Get your free "Bodied" Weapon Skin!

Play in ladder matches and one weekly tournament to claim your free "Bodied" weapon skin in Gears of War 4. 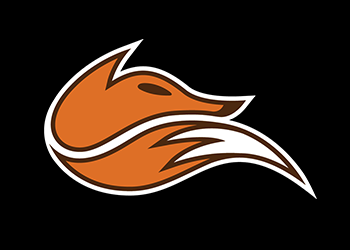